The Church at the heart of the nation, with the nation in its heart”.

This beautiful neo-gothic sandstone church and the adjoining Georgian brick manse known as St Andrew’s House are heritage listed. They are open to the public for weekly guided tours for ACT groups such as Senior friendship groups, Probus groups, historical groups, English as a second language groups, Independent people and Aged Care facilities.

The tours are conducted on Wednesdays  February-July & September-December from 10.30am to 12.15pm

To book your Heritage guided Tour

The Church of St Andrew is a prominent landmark in Canberra, situated on State Circle directly opposite Parliament House.

It was built as the National Presbyterian Cathedral Church and was opened in 1934.

The “Living Stones” exhibition was made possible when the Church was awarded a Heritage Grant from the ACT Government.

The “Living Stones” Exhibition highlights the history of the Church and the lives of some of the Church’s pioneers who were also instrumental in the development of Canberra.  The Archives and Heritage Committee of St Andrew’s decided to honour these early settlers in the region by establishing a permanent exhibition with a focus on their role in the development of our Capital City.  For over eighty years the Church has had members from all walks of life, including Governors-General, Prime Ministers, judges, public servants, teachers, scientists, market gardeners, tradesmen, shopkeepers and their families.

In 1927 the General Assembly of Australia appointed the Very. Rev. John Walker to be the first Presbyterian Minister of Canberra and commissioned him to establish with nationwide Presbyterian support a national Presbyterian Cathedral Church which was opened by the then Governor-General , Sir Isaac Isaacs in 1934.

The“Open Church, Open House” Heritage Tours are held regularly on Wednesday mornings, and visitors to Canberra are invited to contact the co-ordinators.These tours are an opportunity to consider key aspects of our Christian faith. They are of particular interest to those who wish to learn something of the history of the Presbyterian Church and development of Canberra and those concerned with architecture, design and stained glass windows.  Students studying Society, Culture and Religious Studies would also gain much from this program .

Please ring us to let us know when you are coming: 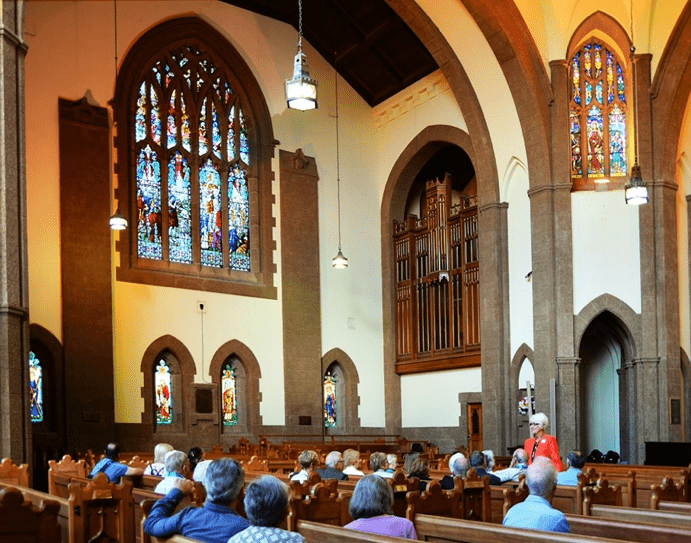